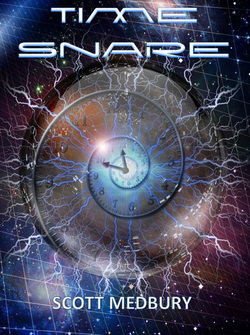 Preview:
1684AD - The Samurai Tokuro Hanuro squints into the distance over a dry grass plain. Death approaches. Twelve Samurai wearing the emerald green of the Shogun rush to carry out his death sentence. The brave Samurai fights well but is finally overwhelmed. He closes his eyes and awaits the bite of their blades...the Shogun's warriors fall into each other. Off balance and stunned, they mill about in confusion the thirst of their blades unsated. The dog of House Matabi has disappeared into thin air.

2128AD -Tokuro Hanuro’s ears pop and the sound of the warrior’s cries cease instantly. He feels bile rise in his throat, and the atmosphere is suddenly heavy and damp.  Is this the afterlife? Another pop in his ears and wet warmth gushes from his nose. He can hear a faint cheering and clapping of hands. He opens his eyes.

The green patterns of light fade from the glass walls of the staging area. The Legate watches as the Japanese warrior opens his eyes and stares directly into his own. The blood streaming from his battle wounds and his nose give the samurai a demonic look. The most powerful man in the Tri-States of America almost steps back before he regains his composure. There is no way the warrior can break through he reinforced glass of the Time Snare.

“Get him tranquilized immediately!” yells the Legate and the cheering and self-congratulation of the technicians around him fades instantly.

Disoriented, but aware, Tokuro takes stock of his situation.  The greybeard is yelling at the others in a strange language. They bustle about like ants in a nest. Tokuro judges that the greybeard is the main threat. He is clearly in command of these strange men, and from his bearing, a warrior of some sort. Outnumbered by at least thirty to one, he knows he has to overpower this old warrior to have any hope of escaping this strange place. Tokuro charges and leaps at the old man his sword raised high above his head...